Gas sorption can be observed and characterized by various methods. We use the gravimetric method to evaluate the solubilities and diffusion coefficients of various polymer+penetrant systems. The gravimetric apparatus is based on a magnetic suspension balance (Figure 1). The magnetic suspension balance is connected to a pressure cell, in which the sample is placed. The weighing mechanism is located above the pressure cell and is thus exposed neither to the high temperatures and pressures nor to the corrosive atmosphere. The accuracy of the balance is up to 1 µg. With such a high accuracy, the influence of swelling or buoyancy cannot be neglected. The volume changes of the sample during sorption (swelling) are evaluated by the video-microscopic apparatus [link]. To evaluate the correction to buoyant force, we carry out gravimetric measurements in which the sample is placed in helium. Helium has negligible solubility in the polymer sample. Therefore, any weight-changes at different pressures of helium are caused just by the buoyant force.

On our gravimetric apparatus, we can carry out experiments at temperatures up to 150 °C and pressures up to 50 bar. The polymer sample weight is ussually about 1 g. 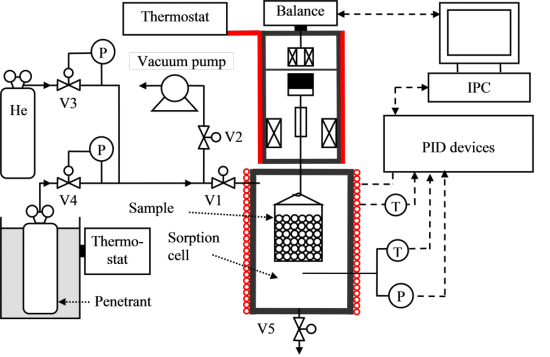 The gravimetric method is based on applying pressure changes and recording the response of sample mass to these changes. The pressure either step-wise increased (measurement of sorption) or step-wise decreased (measurement of desorption). The course of a gravimetric measurement of desorption is schematically depicted in Figure 2. Diffusion data are obtained from the time evolution of the sample mass after pressure changes, while the equilibrium solubilities are obtained from the steady states. 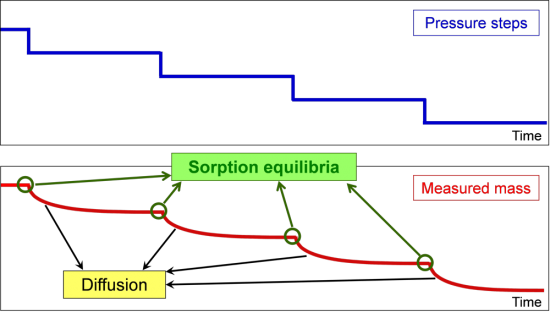 Figure 2. Pressure profile during a desorption experiment and the measured mass response.